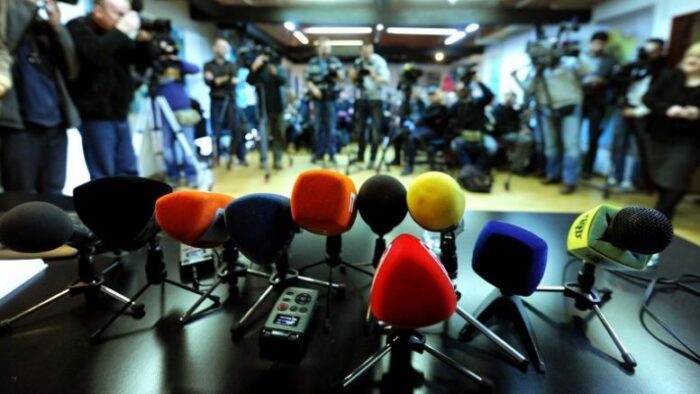 The Bureau of the Assembly of Albania (the Parliament) has published on 02 June 2021 a new regulation for the Accreditation, Accommodation and Orientation of Mass Media in the Parliament.

This new regulation affects audiovisual media, print and online media. In comparison with the existing regulation approved in 2014, this decision stipulates in Article 12 that accredited journalists can only be accommodated in specific rooms (Newsroom) in the parliament building and not be able to follow and report directly from the actual rooms where parliamentary committees or the General Assembly is taking place.

In addition, Article 16 stipulates that the Assembly of Albania, mainly the employees responsible for order and security, as well as, when deemed necessary, representatives from the press office, ensure the escort of accredited media during their stay in the Assembly. Further Article 17 stipulates the exact spaces where accredited media can move in the Parliament building: only in the newsroom, press conference room, in the yard and open gallery of the main assembly area.

Only journalists from the public broadcaster RTSH and public news agency ATSH are recognized with broader freedom of movement inside the parliament and can follow and report directly from the parliamentary committees or the General Assembly.

Article 18 stipulates that access to video broadcasts during the meetings will be provided to the media by the Parliament. Article 29 stipulates that the organization of interviews with MPs is based on the request submitted to the Press Office of the Assembly, by accredited media.

“The Union has sent on 7 June 2021 an official request to the Parliament to provide more details on the implementation of this regulation and change of specific articles that might affect the independent coverage of Parliamentary activities by the media. However, given that there is no unified standard in the European Union about this issue, it would be appropriate to consider best practices and consult relevant media organisations before such decisions are made”, AleksandërÇipa said, Head of the Union of Albanian Journalists.

“Changes in the regulation of the Parliament regarding relations to media must be done with a proper consultation process with civil society, media organisations and other interested parties and it would be appropriate also to consult CoE, OSCE and EU regarding European best practices. Parliament should retract the Decision and start a consultation process”, Blerjana Bino said, Researcher for Safe Journalists Network in Albania.

SafeJournalists Network, representing more than 8,200 media professionals in the Western Balkans, stands in solidarity with Albania colleagues and expresses concern about such conduct by legislative officials that could jeopardize media freedom.

We request from the Albanian Parliament to retract this Decision and adhere to the consultation process, as such regulations have a direct impact on independent media reporting, freedom of expression and transparencyand must be approved only after proper consultation has been carried out with interested stakeholders in the media, civil society and related sectors. Finally, considering that various independent reports express concerns about the state of transparency and accountability of public institutions including the Parliament, this decision will most likely further affect the level of transparency of the Parliament. It is thus crucial for Parliament to strengthen transparency and participation of stakeholders and the way they manage relations with media is also relevant here.

SafeJournalists Network will inform all relevant national and international stakeholders about this case.